Ah, Flying Legends, two words which bring up a complete array of emotions (usually a big smile and sigh of relief that another year has finally past again) and expectations. What's more, year after year the whole team of IVM Duxford and Stephen Grey's “The Fighter Collection” seem to live up to those expectations.

Legends could be described as the Mekka for warbird enthousiasts and each year they do seem to turn up from all directions of the compass in order to witness some of the rarest and most exciting aircraft take to the skies in an almost 4-hour thrilling and hi-energy display.

Sadly, this year's edition also carried some tragedy as the crowd witnessed the loss of P-51 Mustang “Big Beautiful Doll” as the result of a mid-air collision with a Skyraider. Luckily and thanks to the skill of both pilots involved, the accident remained without loss of life, only material damage.

This year's edition promised some promising acts and firsts at Legends: the American display team “the Horsemen” returned to Duxford once more and brought a couple of US Mustangs along, the TFC P-47G Thunderbolt was finally complete (although not airworthy yet) and took part in the static display, the TFC acquired a Rolls-Royce engine P-40F Warhawk which was to arrive in time for the show and there was also the first participation of some of the Red Bull aircraft, namely the F-4U Corsair and the P-38 Lightning.

Unlike last year's edition, which sported bright sunshine all around, this year Legends had to make do with some typically British weather: dark clouds with a rare break allowing to sun to peek through occasionally and a few raindrops now and then.

On both days, between 9am and 12am, £5 buys you a ticket to the “flightline walk”. Here you can get up close and personal with the participating aircraft and it provides the general public in taking some nice static shots. Usually there are even some re-enactors dressed up in periodic clothing who provide an extra touch and feel to the static display.

At 2pm the continuous action starts as the first Merlin engines roar to life.

Traditionally the show is opened by the Supermarine Spitfires. “Only” 7 Spitfires took part in the show this year (last year starred no less than 10, we do sometimes get spoiled) and they would share their slot in the show with no less than three (3!) Messerschmitt 109s, albeit the Hispano Aviación Buchon version (a Spanish license-built version of the Bf-109G-2) of the airplane on the lone Historic Aircraft Collection's Hurricane.

It was the first time since the filming of the famous “Battle of Britain” film in 1968 that such a number of Me-109s were present at Duxford. 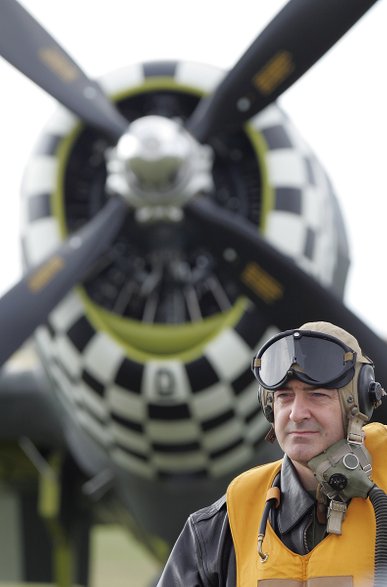 They started out with an eleven ship low flypast which was a beautiful sight and sound to hear, after which the sections broke and the Buchons put on a three-ship display. Meanwhile, the Spitfires participated in the Duxford infamous tailchase, which is basically a series of airfield battering “follow-my leader” flybys.

This year's Spitfire tailchase turned out a bit sedate, but as I said before: we got a bit spoilt in previous editions and are always expecting more out of the organization. We seem to forget from time to time that these relics of the sky are approaching or are already over their 70th birthdays.

Next up, it was US Navy time with the participation of 3 Douglas Skyraiders (2 French based examples from Amicale Jean Baptiste-Salis and Vega Team/Skyraider Avignon, the latter sporting a full warime load of fuel tank, bombs and rockets and one British based AD-4NA owned by Kennet Aviation) and TFC's own Grumman Bearcat.

After a Skyraider formation flyby, the Vega Team Skyraider broke formation and made several solo passes from both sides of the airfield.

After the Skyraiders and Bearcat it was time for the immaculately restored and beautifully painted Change-Vought F4U-7 Corsair owned by Max Alpha Aviation to take center stage, and what a performance it put up! It was a truly great flying sequence flown by a fantastic aircraft.

Next up, for the second year at Legends in 2011 were the United States based and world's only warbird formation demonstration team, the Horsemen. This year pilots Ed Shipley and Dan Friedkin even brought along 2 US based Mustangs, both owned and operated by Comanche Fighters.

The first Mustang is a familiar aircraft at Duxford, although it underwent a complete restoration and sports a new paint scheme. Previously seen at Duxford as Twilight Tear, P-51K-10-NT N98CF 44-12016 is now repainted as “Fragile but Agile”.

The Mustang left Duxford in 2007 to participate in the Gathering of Mustangs and Legends in September of that year and later moved to Fighter Rebuilders in Chino for restoration (she never had a major restoration before with TFC). It was upon stripping her of all paint that faint Pacific Theatre markings were found, more notably the name of Lt. Bert Lee who flew with the 342nd Fighter Squadron of the 348th Fighter Group. So in fact this is an official PTO legend!

She is now repainted in the markings of the 342nd FS and bears the name “Fragile but Agile”, which was in fact not given by Lt. Bert Lee himself, but by the next man who flew her during WWII.

The second Mustang to make the trip with the Horsemen is P-51D-30-NA 44-74391 “February”, which is painted as Major (Lieutenant at that time) James “Jim” L. Brooks' personal aircraft during WWII. Jim Brooks flew with the 307th FS of the 31st FG, belonging to the 15th AF based in Italy at that time. Brooks went on to score a total of 13.5 (the half denoting a shared kill with a fellow allied pilot) kills during the total of 55 missions he flew during WWII.

Major Brooks, now 89 years old, also made the trip to Duxford and was reunited with the aircraft painted in his honors. It was so great to get to meat Mr. Brooks and to be able to shake his hand once more. Thank you for what you have done above our skies during the war!

The Horsemen put on an absolutely tight and breathtaking display. The two Mustangs seemed to be glued together throughout the entire display sequence. Hats off to Ed and Dan … hope to see you again next year!

With the demonstration of Mustang formation flying over, it was now time for another personal favorite: the Mustang tailchase!

Four P-51s battered the skies at Duxford for an amazing tailchase: OFMC's “Ferocious Franky”, TFC's “Miss Velma”, SDPA's “Nooky Booky IV” and Air Fighter Academy's “Big Beautiful Doll”. The latter and unfortunately now late P-51 Mustang was previously own by Rob Davies, but was sold to the German based Air Fighter Academy in April of this year.

After the tail chase, all P-51s landed, apart from “Ferocious Frankie” and the Doll. Both stayed up to accompany Europe's only airworthy Boeing B-17 bomber: Sally B.

After the British and US WWII fighters, it was time for something slower in order to catch a breather. A rare formation of 3 de Havilland Dragons and Dragon Rapide took off for a nice demonstration flight.

The second of two big bomber displays was next up with the rare and immaculate BBMF Lancaster, which is always a true sight for sore eyes. Again, sadly no B-25s this year as the French based “Russels Raiders” B-25 F-AZZU crashed in France in early June of this year as a result of an engine fire after takeoff.

When the Lancaster finished its display, it was again time for something much smaller: a demonstration flight of a Fokker Dr I rotary engined replica by Mikael Carlson. I've truly never seen a Fokker Dr I replica being flown like that, like ever! Mikael Carlson put on a very aerobatic and breathtaking display which baffled a lot of people. Unfortunately for Mikael, it turned a bit sour after his Sunday display as the Fokker's wing made contact with the ground upon landing after it's display, resulting in the aircraft ending with its nose stuck in the dirt. Fortunately Mikael did not suffer any injuries and the aircraft only suffered minor damage.

Next up, another quartet of fighters took center stage, this times all Hawks. Three Curtiss P-40 Warhawks were joined by a lone Curtiss Hawk 75 belonging to TFC. The P-40s were French based P-40N “Little Jeanne” and TFCs rare P-40B which is now fully display qualified. The third P-40 only just made TFC a week prior to Legends: P-40F Warkhawk VH-PIV “Lee's Hope” was newly acquired from Australia.

“Lee's Hope” is a rare Merlin engined P-40 that is painted in the colours of Lt. Robert J. Duffield with the 85th FS, 79th FG stationed in Italy at the time. Note the mix of US markings with combinations of blue stars and stars and bars with or without red borders plus the reversed British fin flashes, with was actually common for some reason within 85th FS aircraft during the war. The nose-art “Lee's Hope” was left over from a previous pilot and Duffield later changed it to Speedy Edie on the original aircraft.

The Curtis Hawk aircraft were unable to display on Sunday due to the aforementioned incident with Mikael Carlson's Fokker Dr. I.

Then it was back to the the Navy theme once more, only this time it was the British Navy with a rare formation of four Hawker aircraft: 2 Hawker Nimrods, 1 Hawker Demon and 1 Hawker Hind.

More Hawkers were up after the biplanes, only this time it was three Furies After a formation flyby, two Furies continued to display together, battering the airfield left to right and vice versa, while the Royal Navy Historic Flight's Sea Fury pleased the crowd with a solo demonstration.

The British naval theme was closed with a demonstration of the Royal Navy's Historic Flight Swordfish II.

Probably the most eagerly anticipated first timers at Legends were The Flying Bulls aircraft: the P-38 Lightning and the F-4U-4 Corsair. The Corsair put on a rather serene display, but the P-38 was most certainly an exquisite sight above Duxford skies. It was the first time since “Hoof” Proudfoot lost his life whilst flying a P-38 at Legends in 1996 that a Lightning was displayed. Although some purists might find the silver paint job on the Red Bull P-38 a slight turnoff, it still remains a great sight to see Europe's only airworthy P-38 display.

Next up were 2 DC-3s (actually a C-53D owned and operated by the Dakota Norway Foundation and a C-47B owned by the Association Normandie). Both aircraft flew a great sequence of low passes. As a matter of fact so low that the Norwegian Dakota earned a yellow card from Duxford's FCC on one pass on Saturday, urging them to stay a bit higher on their next passes.

Last up before the show's finale were a Yak 9 and a French Morane Saulnier MS.406 which both did a solo display.

Traditionally, Flying Legends is closed each year by the Balbo. The Balbo is basically a term which describes any large formation of aircraft. It was used for Sir Douglas Bader's Big Wings which were flown from Duxford during the war. During the Balbo, almost every aircraft which takes part in the display takes off and all together they form a large formation.

On Saturday 28 aircraft participated in the Balbo and on Sunday there were 27 aircraft.

As mentioned in the beginning it was an edition with mixed emotions. It was a great weekend with some magnificent flying displays, but also a sad weekend with the loss of another warbird.

A big thank you to the entire team of IWM Duxford, The Fighter Collection, Ester Blaine and her team and all of the staff and volunteers for the enjoyable weekend and off-course to all of the pilots, owners and mechanics for keeping those warbirds flying. 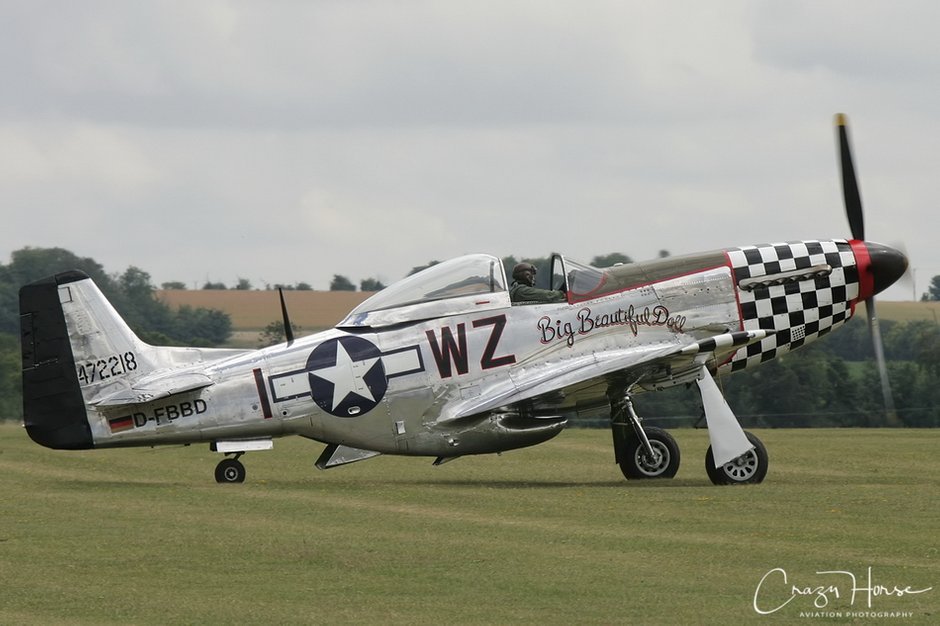