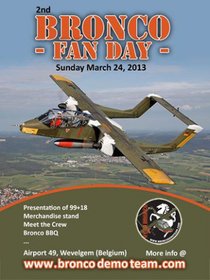 At the end of a week filled with snow in most parts of Belgium, the Bronco Demo Team hosted their second Bronco Fan Day in what is to be an annual tradition of the club.

Their second edition was all about the first public presentation of OV-10 Bronco 99+18. It was a cosy indoor event at their homebase at the Kortrijk – Wevelgem airport with the possibility to take pictures, chat with the crew, gather around the Bronco BBQ and have some drinks amongst friends and aviation enthousiasts.

The Bronco Demo Team was founded in 2010 and sort of came to be following the Photo Flying Days that same year. The team consists of a number of enthusiastic people whose aim is to represent the unique Bronco aircraft to the public. Driving force behind the project is the Bronco display pilot Tony De Bruyn.

It all started way back in 2000 with the OV-10 Bronco Association and its German Wing of the OV-10 Bronco Association (GWOBA). With this association, Tony and his partners acquired two former German Air Force OV-10B Broncos from the Technische Schule der Luftwaffe 3 (TSLw3) at Fassberg, Germany. The ultimate goal from the start was to restore both aircraft and get them back to an airworthy condition.

Not many believed in this goal as both aircraft suffered a considerable amount of aircraft battle damage repairs (teachers at the technical school hacked into the airframes with axes to simulate battle damage).

August of the following year, the instrument panel of 99+26 was fully completed and it was registered G-BZGL. The following month, a ferry-flight permission was obtained and consequently the airframe took off on September 12th , 2001, heading for Duxford with Tony at the controls.
The aircraft was to undergo final restoration work by the Duxford based ARCo (Aircraft Restoration Company).

The second Bronco of the GWOBA, 99+32, was registered G-BZGK on October 6th , 2001, and flew for the first time that day. This airframe too was heading for Duxford to undergo final restoration work.

For the first time since long, Europe once again had not one but two airworthy Broncos…

The North American Aviation Rockwell OV-10 Bronco is a turboprop light attack and observation aircraft conceived in the early 1960s by W.H. Beckett and Colonel K.P. Rice of the US Marine Corps. The goal was to develop an airframe designed for close air support (CAS), forward air control (FAC) and counter insurgence (COIN) combat missions.

The airframe needed to be rugged, extremely maneuverable and simple as it would need to be operated from expedient forward air bases using roads or unpaved runways. As a FAC and CAS aircraft, it also needed extreme maneuverability at slow speeds and it needed to be able to loiter around the target area much longer than a pure jet.

Both gentlemen took a gamble because at that time the US Army was still experimenting with armed helicopters and the USAF was not interested in CAS aircraft at all.

However, during World War II, the US military had made use of light aircraft for directing artillery and close air support, and found the results very effective.

Fortunately for both gentlemen, a "tri-service" specification for a Light Armed Reconnaissance Aircraft (LARA) was approved by the U.S. Navy, Air Force and Army in late 1963. The LARA requirement was based on a perceived need for a new type of "jungle fighting" versatile light attack and observation aircraft. Existing military aircraft in the observation role, such as the Cessna O-1 Bird Dog and Cessna O-2 Skymaster, were considered obsolete. They were too slow and were unable to carry a considerable payload for this flexible role. 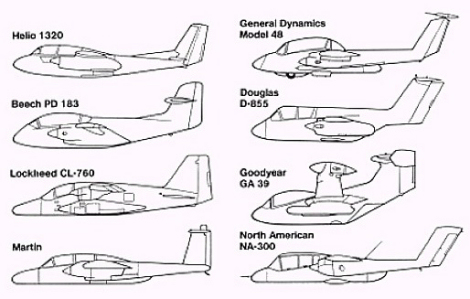 The specification for the LARA aircraft gave cause to worry as they specified an aircraft with a high standard of operating capability:

No less then eleven proposals were submitted by various US aircraft manufacturers.

Seven proposals were picked for further consideration. Amongst them were the Beechcraft PD-183, Douglas D-855, Lockheed CL-760, Martin LARA, Helio 1320, a General Dynamics design and the North American/Rockwell NA-300 design of Beckett and Rice.

In August of 1964 the Rockwell design "NA-300" was selected and the company was awarded a contract for seven prototypes in October.

Following a period of intensive evaluation which resulted in a couple of changed to the design, the Bronco was cleared for production in early 1968. The USMC obtained 114 aircraft and the USAF 157.

The aircraft featured twin turboprop engines, one in a boom on each side of the aircraft, a high-mounted wing and tail plane between the booms. This positioning of both engines and fuselage underneath the wings allowed service crews access to most systems from ground level and allowed the pilot and observer an unobstructed view from the office. To further improve visibility from the air, the canopy was bulged.

The engines rotate in opposite directions to reduce the effects of torque.

The pilot sat in the front seat with an observer just behind him, both in Rockwell LW-3B "zero-zero" (zero speed / zero altitude) ejection seats, with a wedge mounted on top of each seat to punch through the top of the canopy. The observer could eject on his own, or the pilot could eject both himself and the observer. If both ejected at once, there was a slight delay between ejection of the pilot and ejection of the observer and the seats were ejected to different sides of the centerline, to prevent collisions.

The aircraft also featured a cargo compartment behind the observer. The end of the fuselage hinged open to the left to allow access at a convenient low level to the ground. The cargo compartment had a volume of 3.12 cubic meters (110 cubic feet), and a total of 1,450 kilograms (3,200 pounds) of cargo could be carried.

Gun armament consisted of four M60C 7.62 millimeter machine guns with 500 rounds per gun, with two guns mounted in a sponson and angled down on each side of the hull. The guns could be easily removed from a hatch on top of each sponson. The cockpit was fitted with a simple gunsight for the pilot.

The main landing gear retracted backward into the tailbooms, while the nose gear retracted forward. The nose gear could be steered up to 55 degrees to each side. The gear was very rugged, with the main gear featuring a double-telescoping shock absorber assembly, to permit short-field, high angle-of-attack landings, and used low-pressure "fat tires" for handling on rough surfaces.

Just after entering service, the Bronco already saw combat in the Vietnam War.

The USMC kept upgrading their Bronco's (newer engines, countermeasures systems, FLIR, avionics updates and partial glass cockpit scheme) and even flew them during Operation Desert Storm. Unfortunately, the Bronco proved too big a target from shoulder- 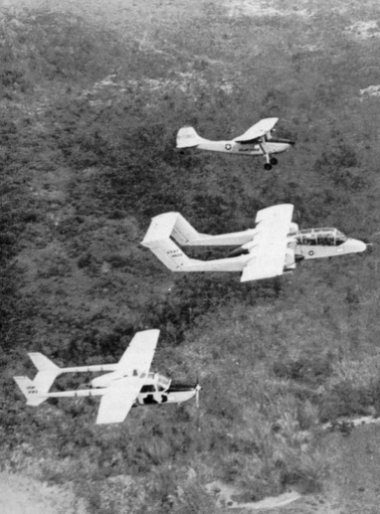 launched heat-seaking missiles and two were quickly shot down after the War started.

The last Broncos went out of service in 1994.

West Germany obtained a number of Broncos for the target tug role to replace British Hawker Sea Furies. The Bronco target tugs lacked the weapons sponsons and carried a target tow pod on the centerline stores pylon. The target operator sat in the back of the machine, with was fitted with a glassed-in rear dome to permit observation of the target. This Bronco variant was designated the "OV-10B", and six were purchased, with the first flying in April 1970.

They were retired in the early ‘90s due to the increasing difficulty in obtaining spares.

The Bronco was built in 1971 and after initial restoration to airworthy condition, was ferried to Duxford on September 12 th , 2001 to undergo final restoration work by ARCo.

After G-BZGK was fully restored and got its permit to fly, G-BZGL took its place in ARCo's workshop.

After a final repaint, 99+32 was first spotted in her new colors at the 2009 Northolt photocall.

99+32 was regularly seen at airshows all over Europe, where Tony dazzled the crowds with the Bronco's extreme agility and maneuverability.

After a fantastic 2011 airshow season and a fabulous start of the 2012 display season (with highlights being able to display at both Waddington and the Royal International Air Tattoo at RAF Fairford) , things to an awkward turn for the bad in July of that year.

On July 10th Tony and his Bronco 99+32 took off at Kemble (Cotswold Airport, UK) to practice a standard display program in good flying conditions. Not long into the flight a major problem occurred which forced Tony to crash-land the Bronco from low altitude into the grass strip in front of the control tower.

The Bronco was destroyed on impact, but luckily Tony managed to open the cockpit himself and was helped out by the fire crew. He was taken to Franchay hospital in Bristol by helicopter. As a result of the crash Tony suffered several burns and back injuries.

With things looking very grim for several months, Tony showed his resilience and fought back his injuries to make an astonishing recovery in February of 2013. He is undergoing final revalidation and will be back to display in 2014!

The return of the Bronco

Meanwhile, the Bronco Association was not resting. Work was already getting underway for another Bronco, 99+18, which was acquired back in 2006.

OV-10B 99+18 made her final flight out of Manching in 1991, when she was destined for the Internationales Luftfahrtmuseum Pflumm in Schwenningen, Germany. On July 28th , 2006, the museum was struck by a severe hail storm, destroying 90% of the hangar and its exhibits. They were in dire need for money and after a visit of members of the GWOBA in September 2006, a deal was made to sell the Bronco to them.

First engine runs were performed on December 4th and a temporary hangar was built to undergo further restoration work to the airframe.

After a successful inspection by the CAA, 99+18 received a permit for test and ferry flight and was registered G-ONAA.

After being grounded for 21 years, 99+18 made its first flight on May 26th , 2012, with Tony at the controls. On Monday May 29th , the Bronco was ferried to the Bronco Demo Team's home base at Kortrijk – Wevelgem in Belgium.

A little more restoration work of the airframe was needed which could not be carried out at Schwenningen-am-Neckar airfield in Germany.

The aircraft was presented to the public at this second Bronco Fan Day on March 24th, 2013.

Restoration work continued and on May 18th , Bronco 99+18 saw daylight once again and performed some engine runs and on July 12th , Dan Griffith flew the Bronco from its home base in Wevelgem, over the channel to Manston (UK) where the restoration works will continue. Goal is to see her display in 2014.

Who knows, perhaps we can even see a dual Bronco display when 99+26s restoration work is finished at Duxford…

We would like to wish the entire Bronco Demo Team the best of luck for all of their future plans and events and a big thumbs up for their warm welcome on their second Bronco Fan Day!