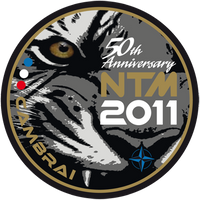 The NATO Tiger Meet is a tradition that started 50 years ago, in 1961. In 1960, the USAFE 79th TFS, flying the F-100 at that time, and No. 74 Sqn of the RAF, flying the Lighning, and both Squadrons sporting a tiger as their Squadron crest, arranged a small social get together. In 1961, following the wishes of M. Pierre Messner (the then French minister of defence), the USAFE 79th TFS took the initiative and invited the RAF No. 74 Sqn and the French Armée de l'air EC01.012 Sqn, flying Super Mystère B2s, to Woodbridge in England. where the Association of Tiger Squadrons was established in order to improve relationships between the individual squadrons within NATO. The following aims, which are still valid to date, were formulated:

The common factor for these Tiger Meets is that each invited Squadron has a Tiger symbol in their Squadron crest (although this rule was “relaxed” a bit to include various other “cats”). The meetings were an instant success and were held annually ever since.

The NTM had evolved greatly over those 50 years. In the early years the main purpose was merely a social get together from Tiger Squadrons, whereas nowadays it is a two week NATO exercise encompassing a range of different scenarios and tactical flying exercises involving a great mix of aircraft types operated by the various Tiger units.

Missions involve range firing, air-to-air missions, low level navigation missions and COMAO missions. The objective of COMAO missions (Composite Air Operations) is to enhance the ability of selected aircrew members and mission planners. This is achieved by effectively integrating the various attack/support components within a package, plan tactics which best consider the capabilities and limitations of each system, communicate the plan, assemble the package and brief a composite attack force mission.

The helicopters are usually integrated as Forward Air Controllers (FAC) or in a CSAR role.

The last four NATO Tiger Meets were even incorporated into larger scale exercises like AIRNORTH's Clean Hunter 01 and Daring Eagle 02. During an average Tiger meet no less than 250 sorties are flown. Between all of the briefing, planning, flying the mission and debriefing, a Tiger Meet nowadays also means hard work for both the air- and ground crews.

The NTM always starts with the arrival of the participants, followed by an opening ceremony were all the flags of the participating countries are raised. From then on the operations start. In the morning most participants fly local missions among each other, while in the afternoon the COMAO's are flown against 'red forces' which are in most cases units from the host nation's country acting as “enemy forces”.

By the end of the OPS week it is time to tighten social strengths between all participating units. It is during these days that the well-known Tiger Games are executed. Tiger Games are mainly a mix of fun and sports.

A Tiger Meet is always concluded by lowering the flags, followed by the traditional farewell party where various awards are handed out. Out of all the awards, the Silver Tiger Trophy is the most important one.

As mentioned before, 2011 sports the 50th edition of the Tiger Meet, which was held at BA (Base Aérienne) 103 at Cambrai Eponoy. BA103 has always been the home of the Escadron de Chasse 01.012 Cambrésis.

Unfortunately it was also the last time that EC 01.012 would be hosting the NTM, since, due to French defense department restructurations, the Squadron is scheduled to be disbanded on March 30th , 2012.

EC 01.012 is the last of the actively participating founding Squadrons of the NATO Tiger Meet (the 79th FS redeployed to the US in 1993 and the 74 Sqn disbanded in 2000), so it was only appropriate that they would be given the honor of hosting the meet one last time, before deactivation.

The French tiger tradition will not be lost however as the Squadron will be transferred to BA113 Saint-Dizier where they will join EC 01.007 “Provence”, flying Rafales.

Consequently, this year's edition of the NTM could count on a great deal of interest. In order to cope with the demand, no less than three spotterdays were organized, on the 11th , 16th and 17th of May.

It was supposed to be the largest Tiger Meet ever but severe budget cuts in NATO forces and turbulent action in Libya resulted in a number of cancellations due to operational reasons.

Nevertheless, the 2011 edition could still count on over 60 aircraft from over 15 nations.

Some Squadrons only stayed for a couple of days, such as the the Spanish Mirage F1s of the Escuadrón 142, Spanish Hornets of ALA 15, Portuguese F-16s of 301 Sqn, the Slovak MiGs and the Royal Navy Merlin of 814 Sqn.

A full list of Nato Tiger Squadrons, past NTMs and the 2011 NTM participants can be found at the bottom of this article.

The 2011 edition lasted two weeks and the flag raising ceremony was held on Monday, May 9th . On that same day, the 335 Mira Sqn was promoted to full membership status. The exercises than started the very next day, on May 10th .

The flag lowering ceremony was held on Thursday, May 19th , which was followed by the after show party. This is also the time at which the trophies are handed out. This year, the bulk of them went to the Portuguese Jaguares of 301 Sqn.

Another tradition of the NTM is painting aircraft in special tiger schemes. 2011 provided no exception and produced some interesting new designs. The host Squadron painted two Mirage 2000 aircraft, one in a special 50th anniversary scheme and one with a tiger tail. The other French Mirage 2000 unit, ECE 05.330, produced a tiger schemed jet. The Belgian 31st FS F-16 is also always a great sight for sore eyes.

The trophy for best paint scheme this year went to the German Panthers of AG 51 with their black Tornado.

I think the EC 01.012 can be proud of their efforts for the 2011 Tiger Meet. It was a nice and well organized event from a spotter's point of view. As always, when a Tiger Meet ends, efforts are already made to plan next year's event.

The 2012 edition of the NTM will be hosted by the Norwegian 338 Skvadron at Oerland MAS, from May 29th until June 8th .