American Beauty, Betty Jane, Cripes A. Mighty, Gentleman Jim, Ina the Macon Belle ... names that once were a big part of our history, names of a once dominant fighter that had a significant part in the outcome of the Second World War. They are names that grace the sides of a P-51 Mustang.

1999 hosted a coming together of what was then named as a truly unique event in airshow history: 65 mustangs and 12 legends who flew them during the war met in Kissimmee, Florida for a once in a lifetime event. Or so it would seem...

When the world needed a hero, the P-51 Mustang was born, designed and built in less then 120 days. Marking the Mustang’s 65th year in combat history, there are now only approximately 1 percent of the original 15,868 Mustangs built flying today. And between the 27th and 30th of September 2007, at Rickenbacker International Airport, the legend was honored one last time for the 2007 Gathering of Mustangs and Legends: The Final Roundup.

This event was all about this magnificent piece of engineering, but most of all it's about reuniting them with the men and women who serviced and flew them during those dark days of WWII; to honor and thank them for what they did for the world and to hear them tell their stories. In addition to the celebration of the Mustang and Legends, this event also was a tribute to the 60th anniversary of the USAF.

The original plans were to get 100 mustangs and 51 legends together. Bad weather on Thursday prevented this from happening, but still an amazing 76 mustangs and 49 legends made it to the event. Among some of the invitees were several Air Force aircraft from past and present: the USAF Thunderbirds, F-15 West Coast Demo Team, F-16 East Coast Demo Team, F-22 Raptor Demo Team, B-17's, B-25's, P-38's, P-40's and one of only 2 fly worthy Lancasters.

The event was hosted and organized by the Stallion 51 Corporation, which specializes in P-51 Mustang training. Lee Lauderback is probably the world's most experienced Mustang pilot today, accumulating over 22,000 flight hours in all types of aircraft including well over 9,500 hours in the Mustang. Along with his wife Angela West, the two of them hosted the event at Rickenbacker Airport, Columbus, Ohio.

Rickenbacker was once home to the 447th Composite Group, better known as the Tuskegee Airmen.

Weather looked grimm at first, with a huge thunderstorm preventing a lot of participants from getting to the airport. Amazingly, the remainder of the week provided lots of sun and clear flying weather. The participant which were unable to reach the airport on Thursday would do so on Friday.

The gates opened at 8am and things got under way at 9.30am. With this being a unique event, crowds were amassed throughout the weekend: if you weren't there at about 6.30am you would have to deal with a large queue to get in. No problems here though, tickets bought in advance and well in time to be one of the first to gain entrance to the show grounds, my plan was to be in one of the grandstands on Friday, to roam around the show grounds on Saturday and an unforgettable experience to be able to be amongst the legends in the Legends Club on Sunday. The moment you gained access you were able to walk through the "Mustang Row": all Mustangs were parked at the ramp where you could get a very close-up look (and feel because there were no barriers around them :D) of those beautiful Mustangs. You could see everyone’s eyes lighting up and everybody had a big smile on their faces. I felt like a kid in a candy store...

Shooting into the sun during the displays for most of the day proved a little challenging, but being at the event of the year this was only a minor disappointment. At 9.30am the opening ceremony got under way with one of the biggest US flags in the world being flown in under the feet of a parachutist with the "Star Spangled Banner" playing and a first salute with a pass of 4 P-51's in diamond formation.

After that things got slowly under way with most of the civilian performance showing their acts first. 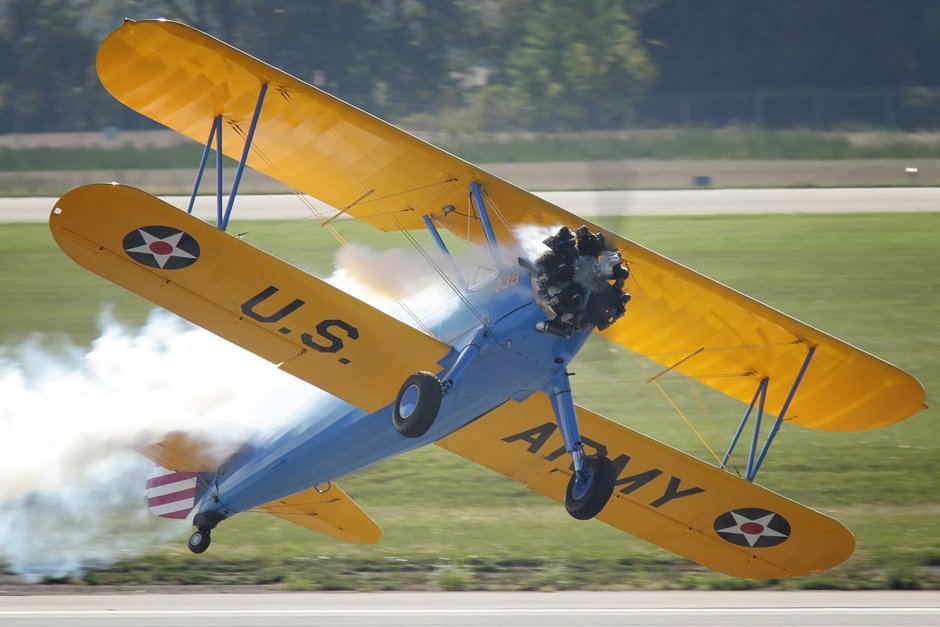 The one that amazed us the most was John Mohr's display in the vintage Boeing Stearman: you've truly never seen a Stearman being flown like that before. It was one of the best displays of the day.

After that, Lee Lauderback took to the skies flying his P-51 "Crazy Horse". With the music of Steven Spielberg's "Empire of the Sun" playing in the background, Lee gave away a breathtaking display, showing the Mustang to the vast crowd. Lee's solo display was followed by a Horsemen routine: 2 P-51's doing their display in close formation: what a sight!

Around noon, the airspace was given to the modern day fighter planes: first up the F-16 solo display followed by that of the F-15. After each display followed a heritage flight with what else, one of more P-51's. After the F-15 it was time for the USAF latest breed of fighter and a first for us: the F-22 Raptor. If you had to think of one word to describe this fighter best it would be simple "WOW"! The Raptor put on a truly awesome and formidable display after which it was joined by no less then 3 P-51's for another Heritage Flight.

The only multiple jet display team present were the USAF Thunderbirds who gave away another great display of close formation flying.

The afternoon was an absolute delight with pyrotechnic displays of 2 B-25 bombers, a B-17, the Canadian Lancaster, a P-63 Aircobra, a P-40, 2 P-47s and several Mustangs. Furthermore there was a tribute to the WASPS (Women Air Force Service Pilots) and a tribute to the Tuskegee Airmen, but the highlight of the show was the mass formation of 20 Mustangs in the air, in the shape of a big number 51! There is nothing like the sound of 20 Merlins passing over your head...

The show ended with a missing man formation of P-51's which brought tears to many eyes.

We would like to take this opportunity to thank everyone who made this unique event possible: Lee and Angela from Stallion 51, the hundreds of volunteers at the show, and especially the legends. Being able to shake the hands of men such as Clarence "Bud" Anderson, Clyde East, "Punchy" Powell, Alan Rigby, the Patillo brothers and many more, and getting them to sign our copy of the event book was beyond our wildest dreams. A very big "Thank You" to them and to every man and woman who served, flew or gave their life during the Second World War.

The 2007 Gathering of Mustangs and Legends was personally the best event we ever attended and looking back we arehonored to be able to say we were there... Mustangs Forever!

The Mustangs in attendence at the even were:

The following legends who flew the P-51 Mustangs were also present at the event: