2011 is already the 21st edition of the Stampe Fly In. This fun two-day event at Deurne Airport, Antwerp, always succeeds in bringing together a nice mix of oldtimer aircraft. This edition proved no different with the participation of a Spitfire, a P-51 Mustang, 2 T-28 Trojans, 2 Harvards, a DC-3 and off-course a whole bunch of the star aircraft of the event: the Belgian designed Stampe SV-4.

The 2011 edition also marked a tribute to Belgian aviator Baudouin De Changy. Lt. Baudouin Carpentier de Changy was a fighter-pilot flying Hawker Hunter F.6 's at the 7th Wing of Chièvres. In 1960 he volunteered for duty with the Fire Assistance Flights (FAF) in Belgian Congo. Flying his T-6 4KA, armed Harvard H-210, he managed to rescue his fellow pilot Sgt. Guy De Pypere from the airfield of Matadi-Tshimpi in pure Hollywood-style . He landed in front of the astonished rebels occupying the airfield's tower, to pick up his injured friend who had made a belly landing in the high grass bordering the airfield after being hit by ground fire. Unfortunately de Changy was shot down over the Inkisi bridge a few days later on July 17th, 1960, and although he survived an emergency landing, he was slaughtered by the rebels.

The museum's Harvard N4109C was repainted in Lt. De Changy's colors for the occasion.

The guys from the Stampe Vertongen museum can look back at another successful edition with some exceptional demon-strations of the Spitfire and the P-51. On Saturday afternoon, the entire group of Chipmunks from the annual Chipmunk meeting at Zoersel airfield came by to pay the crowd at Deurne a visit. The mass SV-4 flyby on Sunday morning is also always a great sight for sore eyes. 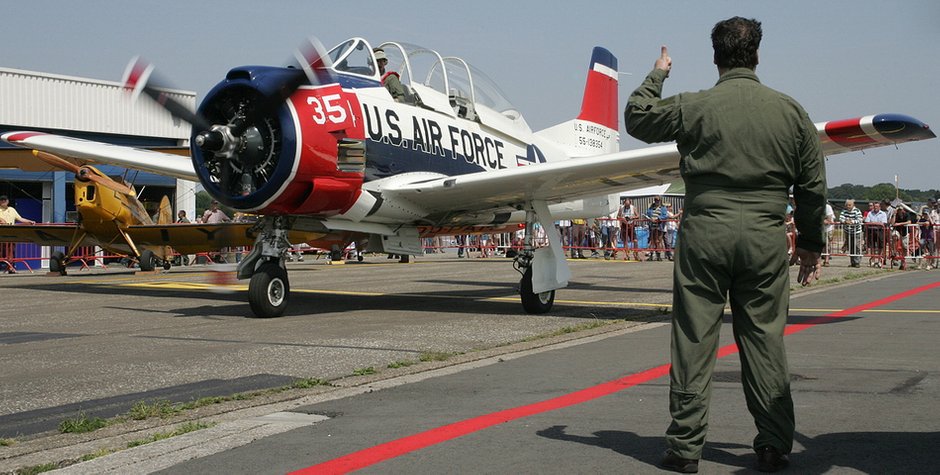 History of the SV-4

The airport of Deurne (Antwerp) was once the place where the Stampe & Vertongen factory was located. Jean Stampe and Maurice Vertongen were 2 WWI aviators (Stampe was the ex-pilot of King Albert I) who, in 1922, decided to create a military flying school. They found no existing aircraft suitable for their purpose at that time, so they decided to develop one of their own. 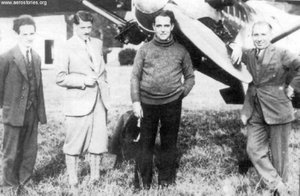 At first they turned to the Renard brothers from Brussels and built airplanes based on Alfred Renard's design, such as the RSV32 and 26. As Renard left the company in order to establish his own business, Stampe & Vertongen hired a new young engineer by the name of Georges Ivanow, who, at first, brought further improvements to Renard's designs.

The Stampe & Vertongen factory at Deurne was established in 1930. In 1932, George was asked to develop a totally new aircraft. The result was called the SV4 (named after both owners) and the first flight took place on May 13th , 1933. The prototype (registration OO-ANI) received its airworthy certificate on May 26th of that same year. It weighed just over 760kg and was powered by a Gipsy Major engine, providing the aircraft with a cruising speed of 140 km/h.

The aircraft was quickly put into production and was put into service. Between mid-1933 and 1938, only six aircraft were built however (registrations were OO-ANK, OO-ANC, OO-ACB, OO-APR and OO-ASU).

Stampe & Vertongen had to compete with the De Havilland DH 82 Tiger Moth, but the SV4 was more maneuverable and thus more suitable as a trainer.
Following the air crash of a twin engine SV10, causing the death of both George Ivanow and Leon Stampe (the son of Jean), the company immediately ceased all aircraft designing and production and concentrated on maintenance activities only.

Following repeated requests from Elza Leyzen, an ex-student of Jean Stampe, the company finally agreed to start developing and producing aircraft once more. A new engineer, B. Demidoff, was hired. He designed and built an aerobatic airframe, which was named the SV4B. The first production model, registration OO-JAN, flew on October 19th , 1937. With a max. weight of 825kg, the aircraft was rated for aerobatics and had a maximum speed of 385km/h.

It first flew with an upright Gipsy engine, which was later traded for a Gypsy Major.

Although the Belgian Air Force showed interest in the aircraft, no orders came through. It wasn't until the BAF wanted to replace their Avro 530 aircraft in 1939, that Stampe & Vertongen entered as competitors for a replacement aircraft with a modified (simplified) version of the SV4B. Two aircraft were built: OO-ATC and OO-ATD.

In July of 1939, the French Air Force showed interest in their design and ordered 30 examples.

Just as the future for the SV4B was becoming a very bright one, Germany invaded Poland in September of that same year. At that time, France had already placed an extra order for another 300 aircraft. The factory in Deurne did not have the capacity to deliver that many airframes on such short notice, so they were built under license by Farman in France. In January of 1940, the order was raised to 400 aircraft.

In 1944, the factory was destroyed by a German V-1. It wasn't until 1947 that the production of the SV-4B was started again, along with their original partner, Renard. The SV-4B received an upgrade, comprising of a more powerful engine (the Gipsy Major 10 and later models had a Blackburn Cirrus Major III engine) and a closed (sliding) cockpit.

The Belgian Air Force replaced their Tiger Moths and ordered 65 SV-4Bs for basic flying training in 1947. Another 850 examples were built in France and Algeria.

The last SV4-B (OO-SRS) came off the production line on October 7th , 1955, but they remained in service with the BAF until they were replaced by the Marchetti SF260 in 1969

The SV.4s owned by the ASC

The Sv.4s owned by the Antwerp Stampe Center are: 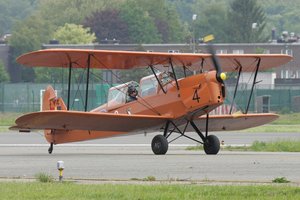 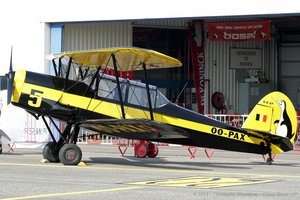 After WWII, the Belgian AF ordered 65 Stampe SV.4Bs. OO-EIR is the oldest example of those 65 and still wears the same color scheme (V4) is it did when it was delivered back on August 18th, 1948.

After 30 years of military service, she got civil registration OO-EIR on December 6th , 1978. After a lengthy storage period, the airframe was revised and restored by Gerrit Titeca in May of 1997.

This SV.4B flew with the Belgian Air Force as V5. It was sold to a civilian owner in 1977. The airframe moved to Antwerp in the late 90s and was completely revised. It also received a new historically correct black and yellow color scheme which was used by a number of Stampes within the Belgian Air Force.

OO-GWD is one of the most historic important airframes of the collection. It was delivered as V18 to the Belgian Air Force on October 30th, 1949.

After that, she became part of the 2-ship SV.4B aerobatic team 'Les Manchots' (Pengiun).

Both aicraft sported a black and white color scheme. The front cockpit was sealed off. Through various civil owners, the airframe finally made its way back to Antwerp on August 30th , 1993.
It is on permanent display in the Stampe & Vertongen museum.

This airframe was delivered to the Belgian Air Force on April 20th, 1951. Along with V18 (OO-GWD) it was one of the two display aircraft of the “Les Manchots” aerobatic display team.

The aircraft remained in service until July of 1970, after which it was donated to the Brussels Army Museum.

After months of negotiations, the airframe finally made its way back to Antwerp on August 18th, 2008, where it is now on display in the Stampe & Vertongen museum. 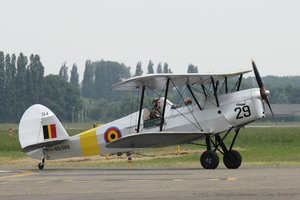 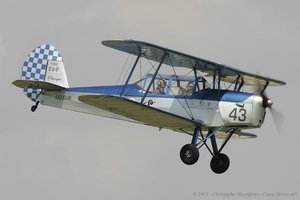 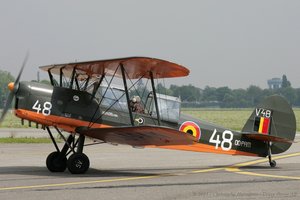 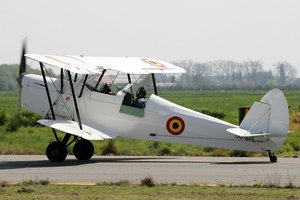 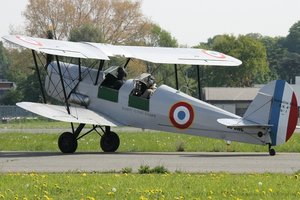 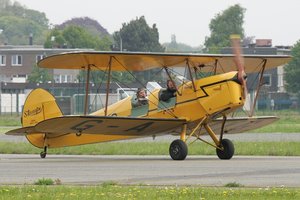 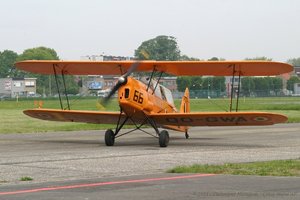 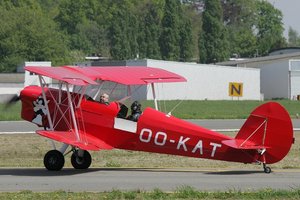 In March of 1971 she received civil registration OO-GWB.

In September of 1974 she became the property of the Brasschaat Aeroclub, but was acquired by the ASC-president Danny Cabooter.

The airframe underwent a thorough restoration process and was repainted in a silver color scheme, which was worn by Stampes under service with the Belgian Air Force in the early 50s. It also wears its Air Force code of V29.

This airframe was delivered to the Belgian Air Force in November of 1952. During the 60s, it was primarily used as a tow-aircraft for gliders.

It was sold to Guy Valvekens in March of 1978 and received civil registration OO-SVB.

After the aircraft had been sold to a Dutch owner it became a regular visitor to airshows until it crashed on December 3rd , 1986, killing the pilot. The wreckage was restored to airworthy condition by Gerrit Titeca.

This is a unique airframe in the sence that it is the last built flying Stampe with the Blackburn Cirrus engine. It initially flew with the Belgian Air Force as V48.

When the aircraft came under civil registration, she passed through several owners who all operated her from the Antwerp Airport.

OO-BPL has been part of the Antwerp Stampe Center collection since 2001. She initially flew with the Belgian Air Force as V52. She entered the civil marked in 1978. On July 5th, 1980, the aircraft crashed, killing the pilot.

She is painted in the historically correct white color scheme, used by pre-WWII Stampe OO-ATD, which was the aircraft in which Mike Donnet and Leon Divoy escaped to England in the summer of 1941.

This Stampe is the first one that was built under license in France, hence the title “Oldest Flying Stampe” on the airfame.
In contrast to many SV-4Bs built in France, OO-GWC houses the English Gipsy Major engine instead of a Renault engine.

It flew with the French Navy between June of 1945 and August of 1950. After a short period under civil registration in France and the United States, it was brought back to Antwerp by ASC-president Danny Cabooter in 1991.
It was subsequently restored by Gerrit Titeca and was repainted in its original French Air Force color scheme.

This UK registered SV-4B is also a French license built example. It arrived in Grimbergen, Belgium on November 24th , 1965, and was given civil registration OO-CKZ.

In April of 1972 the airframe litteraly dissapeared until it was rediscovered and restored in the early 80s by Gerrit Titeca.
At that time, the Renault engine was also replace with a Gipsy Major example.

Shortly after restoration, the airframe went back to the UK as G-AIYG. In 1995, it came back to Belgium but retained its UK registration.

This is also a French license built SV.4B, rolling of the production line in 1947 as F-BDBO.
It flew with the college aeroclub of France until 1957 and was later kept in storage until 1966.

Between 1966 and 1970 it operated from the French La Ferté Alais airport.

In the early 70s it was sold to the US, but never really flew there. It was acquired by the Antwerp Stampe Center and restored by Gerrit Titeca. During restoration, she was converted to an SV.4B model with closed cockpit and Gipsy Major engine. It is repainted in the colors of BAF V66.

Until the late 60s, she flew with various French aviation clubs. The airframe made the move to Belgium in January of 1974, when it was acquired by G. Gillet.

At that time registration changed to OO-KAT.

In the early 70s this aircraft served as the prototype for conversion to Stampe SV.4E (with the Lycoming engine).
After a little over 25 years, Gillet sold his Stampe to the Stampe museum in 2000.