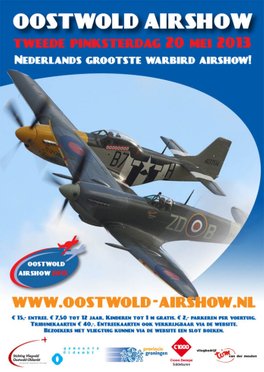 It always seems like an eternity to wait for this “romantic aviation” event. Another 2 years has past since their sixth edition of this bi-annual airshow in 2011, but they were back as strong as ever this year. Their seventh edition proved almost to be a disastrous one as the weather on that Whit Monday holiday morning consisted of an extremely low cloud base and loads and loads of rain.

That very same dreadful weather unfortunately also prevented several invited highlights, such as the Stichting Koninklijke Luchtmacht Historische Vlucht newly restored Spitfire Mk. IX, the SWIP team and The Fighter Collection's Curtiss P-40B, which were bound for the Oostwold showgrounds that day from even getting there. The planned Old Flying Machine Company's Spitfire and Mustang duo was also not happening because of the unforeseen engine change on the P-51 Mustang Ferocious Frankie.

Despite all this, the show organizers pulled off an amazing airshow event nevertheless and even some higher powers intervened as the cloud base above Oostwold started to lift enough to provide all present show acts to display their (albeit flat) routines. Even the rain held back till after the show…

Oostwold airport is a small grass-strip airport in the northern region of the Netherlands. Although considered by many as a relatively “small” event, it is actually the largest civil airshow in the Netherlands. The airfield is owned by Tom Karst van der Meulen, who also owns the P-51D PH-PSI Damn Yankee.

Tom's father started a small crop dusting business in the Netherlands back in 1954. Came the 80s, his company was already one of the biggest crop dusting companies in Europe.

Stricter environmental legislation in 1995 was the cause of a serious setback in crop dusting over the Netherlands, so the van der Meulen family had to look for other means of business. Nowadays they maintain and restore aircraft, provide scenic tours over Holland, do all kinds of commercial and photo flights and offer skydiving services.

Tom acquired his P-51D Mustang in 1993 and began flying demonstration flights at several airshows. The very first show held at Oostwold airport was in 1999.

There was lots to see on the ground as well. Members of several re-enactment teams, such as Band of Brothers, Etor 40-45, Keep Them Rolling and Pocket Tour, took the crowds back to the look and feel of WWII. Several period vehicles further enhanced this feeling.

Another act which does not go unnoticed at the shows they participate at is the Flying Circus. They are, well, as the name states, a flying circus. They are a group of volunteers which organize an outdoor event around the theme of aviation and the aviators of yesteryear. Up until last year this was mainly done with the Boeing Stearman “Old Crow” and the “Storyteller” concept, but this year the act grew out into a more slapstick style Flying Circus type act, which still includes the Stearman.

Their Stearman was built in 1942 in Texas as part of a batch of 1000 aircraft destined for the USAAF. It got redirected to the US Navy however on January 30th , 1943. It was sold surplus after the war and after several civil US owners, it finally found its way to her current Dutch owner, Hans Nordsiek, in 1990. The plane currently resides at the Lelystad Airport and underwent a major work-over in 2006.

The flying display commenced with, who else but the man himself, Tom van der Meulen, in his P-51 Mustang PH-PSI Damn Yankee. 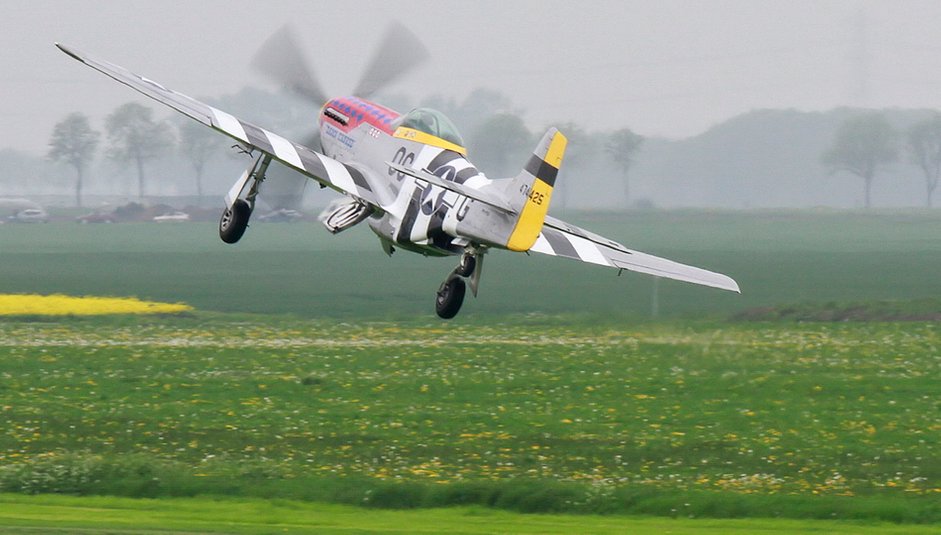 P-51D-30-NA 44-74425 was delivered by North American Aviation to the USAAF in 1945 where she served briefly with the 356th FG. After the Second World War, it went on to serve with the Royal Canadian Air Force. After being sold to several civil US owners, she was acquired by the Stichting Dutch Mustang Flight at Lelystad, Netherlands. She was painted in the colors of 356 th FG, 359 th FS 474425/OC-G/Damn Yankee. It wears the colors of the Squadron, but has a fictional name. You can read more about Damn Yankee here.

Tom flew a nice routine in the P-51 and set the pace for things to come.

First multi-aircraft demonstration team to perform at the show was the Seagull Formation team. The team uses four Focke Wulf Piaggio 149D trainer aircraft and was founded in 1986. They operate out of Hoogeveen.

They were followed by a display of the Saab Safir 91D PH-RLA of the Levende Oude Lucthvaart (LOL). The Safir was used by the Rijksluchtvaartschool at Eelde for training purposes between 1959 and 1979. This particular aircraft was stored on the rooftop of a tyre company after her military service.

Luckily it was acquired and restored back to flying condition in 1987.

A huge Antonov An-2 biplane took to the skies now, owned and operated by Classic Wings. The Antonov An-2 , nickname Annie, is the largest biplane in the world and was designed by the USSR in 1946.

It was, well IS used as a light utility transport, parachute drop aircraft and agricultural work aircraft. Is used, because remarkably enough the type is still operated by many around the globe today! As a matter of fact, the Russians continued to build the type until late 2002!

Its two large biplane wings give it an extreme maneuverability at slow speeds and make it an ideal aircraft for use on short, unimproved fields. Several design features were incorporated to take further maximum advantage of operating from those fields:

Because it is Russian, it also has another advantage: it is extremely rugged and can withstand extreme temperatures.

It was designed to meet a 1947 Soviet Ministry of Forestry requirement for a replacement for the Polikarpov Po-2, which was used in large numbers in both agricultural and utility roles. Antonov designed a large single bay biplane of all-metal construction, with an enclosed cockpit and a cabin with room for seats accommodating up to twelve passengers. Over 18000 examples of the An-2 were built.

The first prototype flew on August 31st , 1947. The An-2 is powered by a Shvetsov ASh-62 engine and used about 43 gallons of avgas per hour.

In its handbook, the Antonov An-2 has not stall speed listed. As a matter of fact, a note in the pilot's handbook reads: "If the engine quits in instrument conditions or at night, the pilot should pull the control column full aft and keep the wings level. The leading-edge slats will snap out at about 64 km/h (40 mph), and when the airplane slows to a forward speed of about 40 km/h (25 mph), the airplane will sink at about a parachute descent rate until the aircraft hits the ground."

Pilots of the An-2 say one can fly the aircraft in full control at 30 mph (50 km/u) (as a contrast, a modern Cessna four-seater light aircraft has a stall speed of around 50 mph). If it flies into a 35 mph headwind, it can even fly backwards whilst under full control!

The example owned and operated by Classic Wings, a Dutch aviation company , were kind enough to demonstrate the slow handling characteristics of the Antonov to the crowds. Never thought I could be so impressed by such an aircraft…

The contrast couldn't be bigger with the next aircraft to display: the Extra 300 displayed by René Kamphues. The EXTRA 300S is a single seat, low-wing high performance aerobatic aircraft. Its structure is mainly built from steel tubing and carbon fiber allowing the aircraft to withstand positive and negative loads of up to 10 G's!

The Dutch “Stichting Fokker Four” maintains and flies four Fokker S-11 Instructor aircraft. The Fokker S-11 is a single engine, two-seat propeller aircraft developed after WWII as a basic trainer for the Dutch Air Force. The Air Force used them until 1973, as well as several foreign countries, such as Israel, Italy, Brazil, Paraguay and Bolivia.

Formation aerobatics were further carried out by a Pitts duo: the British TRIG team. The TRIG Aerobatic Team flies a pair of Pitts S-1D Specials. The team's display combines a variety of classic aerobatic manoeuvres, including loops, rolls and stalls, as well as dizzying gyroscopic figures pulling G-forces ranging between +6g and -4g.

Always welcome guests at the Oostwold airshow are the Aerosuperbatics team, aka the Breitling Wingwalkers. The team is based in the UK (Rendcomb) and consists out of four Boeing Stearman aircraft painted in a nice white and orange paintscheme. As their team name mentions, they are sponsored by Swiss watch manufacturer Breitling.

The team is the only aerobatic wingwalking formation team in the world and have been displaying all over the UK and Europe for over 28 years now. Each aircraft consists of a pilot and a wingwalker girl. The girls strap themselves on top of the wing before taxiing and take-off. Once in the air, the pilots perform a breathtaking sequence of acrobatic manoeuvres, including loopings, barrel rolls, stall turns and even inverted flight, all with the wingwalkers on top of the wing. During the display the girls demonstrate their skills by doing acrobatic manoeuvres while they are strapped to the top of the wings of the aircraft. The girls face speeds of up to 150mph and up to 4G of g-force. They even climb back into the cockpit when they have finished their display, all whilst the aircraft is still in the air.

Whilst the Spitfire and Mustang duo did not go ahead because of the aforementioned engine problems of the P-51, the organizers succeeded in replacing it with a … dual Spitfire display! The Old Flying Machine Company Spitfire Mk. IXB and The Fighter Collection's Mk. XIVe provides us with some great Merlin songs over the Oostwold skies. A truly magnificent sight and sound and a true crowd favorite at the show.

The OFMC Spitfire is perhaps one of the most famous of all Spitfires still flying today. MH434 was built in 1943 at Vickers, Castle Bromwich and is completely original, and has never been fully rebuilt.

After being flight tested by Alex Henshaw in August of 1943, the aircraft went into service with No. 222 Squadron and was assigned to South African pilot Flt Lt Henry Lardner-Burke. Burke scored 7.5 kills, damaged three and retired as a Wing Commander in WWII.
Two and a half of his kills were made whilst flying MH434.

The Spitfire was retired in March of 1945, after which it was acquired by the Royal Netherlands Air Force in 1947 where it served with 322 Sqn. It went on to the Belgian Air Force after that where she served at the Advanced Pilot School at Koksijde and with 13 Wing at Brustem.

It was sodl on to several civilian owners and participated in several movies, such as “Operation Crossbow” , “The Battle of Britain” and “A Bridge Too Far”.

In April of 1983 MH434 was sold at auction to the present and illustrious owner, Ray Hanna (Nalfire Aviation Ltd) and became one of OFMCs founding aircraft. It underwent its first major rebuild in the winter of 1994. It is currently flown in the authentic No. 222 Sqn colors, coded ZD-B.

After the Merlin songs it was time for something a lot quieter in the form of the Fox Glider Team. The Margañsky MDM-1 FOX is a Polish built glider especially designed for full aerobatics. It can fly up to speeds of 285 km/h and can sustain G-forces of up to +9G and -6G.

As the show was drawing to an end it was time for two more genuine warbirds to take to the skies. First was the Yak Association Yak-3U. Their Yak-3U is stationed at the Lelystad airfield.

Last but not least (and a personal favorite) was Peter Teichman in the P-51D-20-NA Mustang “Jumpin Jacques”. You can read all about the aircraft history in our airworthy Mustang section. 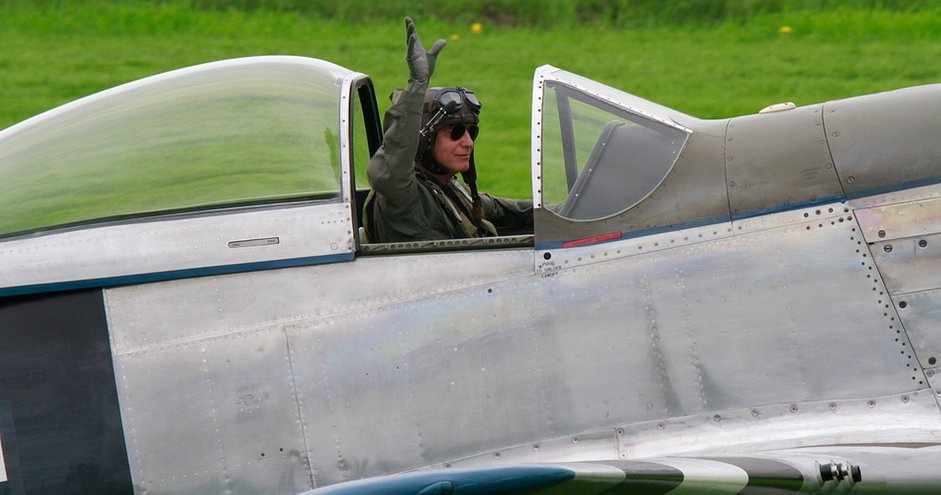 As usual, Peter left the crowds in awe of this beautiful machine and its Mustang howl on numerous fast passes over the airfield.

We would like to express a big thank you to the entire organization and volunteers who make this event so worthwhile time and time again. We're already looking forward to the next edition on May 25th , 2015.