After a sabbat year in 2014 (due to the Belgian Air Force Days at nearby Kleine Brogel in September) Sanicole once again brought us the fabulous format of the Sunset Airshow in 2015.

Don't forget that he Sanicole Sunset Airshow and Sanicole Airshow are privately organized airshows in Belgium. Having said that: how they manage to attract such a vast amount of military, warbird and civil displays seems to amaze the aviation enthusiasts every single year. In 2015 they managed to attract not two, not three, but four (!!) international display teams: The RAF Red Arrows, the French Patrouille de France, the Italian Frecce Tricolore and the swiss Patrouille Suisse, how about that for a flying program!

What's more, two of the teams would be flying at the Sunset Show. Couple that to the flare extravaganza of the familiar Dutch AH-64D Apache Display Team and off-course our very own BAF F-16 Solo Display Team and you've got a sure recipe for an unforgettable couple of hours of airshow heaven.

The flying display started gently with a display of the Stolp Starduster Too, flown by Jean-Marc d'Hulst. The type is a popular biplane homebuilt design. It's a two seater which is not specifically built for aerobatics, but it is designed to cope with +6 to -6Gs, so it can perform some aerobatic manouvers.

The first of the big display teams kicked things up a bit: the Patrouille de France. It was very nice seeing them perform their display routine against a lovely half clouded, sun setting sky. The Patrouille de France had to perform at another show on both weekend days, but they made a hole in their schedule to display on Friday evening for the Sunset Airshow: thank you very much La Patrouille!

Originating as far back as 1931, it is one of the world's oldest and most skilled demonstration team. The team's aircraft have evolved from the Morane-Saulnier MS-230 to the Stampe SV.4 just after WWII, then 12 in number.

Following their popularity a number of other similar units were formed within the French Air Force, amongst them a team of 4 F-84s.

Carried away by the show he just witnesses at an aerial event at Maison Blanche in Algeria, the show's commentator gave the team the name “Patrouille de France”.

Over the next decades, four seperate Air Force units continued to perform both at a national and international airshow circuit. In 1964, budget cuts led to reductions in the French Air Force, leading to the dissolution of the teams. Nevertheless, the Ministry of Defense did not want the name and reputation to become lost and created an official “Patrouille de l'École de l'air”, flying six Fouga Magister aircraft.

They became the French national display team for the next 16 years, ending with 9 aircraft.

In 1980, the aging Fouga was replaced with the newer Dassault Alpha Jet advanced trainer aircraft and the team switched to 7 aircraft, with an additional aircraft added in 1982.

The team made history when in 2009, Commandant Virginie Guyot was appointed leader of the team, thus becoming the first woman in history to lead a demonstration team.

In 2013, the team celebrated its 60th anniversary and it is still going strong!

Another fixed value at the Sunset Airshow is Melissa Pemberton. This year she displayed in her Zivko Edge 540 for the first time. Unlike the sound of the name, the Zivko Edge is a US made aircraft developed and manufactured by Zivko Aeronautics.
It is a highly aerobatic aircraft, capable of a 420 degree per second roll rate and a 3,700 foot per minute climb rate. The Zivko Edge 540 is the most common aircraft used in the Red Bull Air Race World Series.

Melissa, now 31, is an experienced airshow and competition aerobatic pilot. Despite her youth, this is her twelfth airshow season. She has been flying aerobatics since she was 17 and competing since she was 19 years old. Melissa grew up flying basic aerobatics in Pennsylvania with her grandmother in a Cessna 150 Aerobat.

In 2006, she became the youngest female to ever make the US Unlimited Aerobatic Team when she was just 22. She was in Europe this year for the World Aerobatic Championship held in France where, as part of the US National team, she took third in the Women's championship.

From the Edge 540, the noise level raised a considerable amount with the display of the Swiss Air Force McDonnell Douglas F/A-18C Hornet, flown by Capt. Julian ‘Teddy' Meister.

It was a great sight to see the legacy Hornet displayed against a sun setting sky.

The Hornet was followed by the second large European display team of the evening: the RAF Red Arrows. Like the Patrouille de France, the Red Arrows had other display obligations during the weekend but were very kind to display their routine at the Sunset Airshow only. Not that we mind, on the contrary: it was a nice change to see them display against a setting sunlit sky.

The Red Arrows were formed back in 1964 and initially flew with seven Folland Gnat trainers. In 1966, the team expanded to nine members and in 1979 they made the switch to the BAe Hawk trainer.

Since their existence, they've performed well over 4000 displays in over 53 countries. As usual, they showcased another example of precision flying combined with some thrilling solo passes. In 2014, the team celebrated its 50th anniversary year!

How the Sanicole organization pulled this one off, I don't know, but what a sight and opportunity this was, especially against a spectacular sky!

After two passes, the F-16 pulled away and started its high energy solo routine. The sky was getting darker and so the tone was set for the rest of the evening to incorporate flares into the display routines.
The Belgian Air Force F-16 Solo Display Team for 2015 through 2017 is based at Kleine Brogel AB. The F-16 solo display shifts between Kleine Brogel and Florennes AB every two to three years. In 2015 the team from Kleine Brogel took over and consists of personnel from No. 31 and 349 Squadrons. Solo display pilot is Commandant Tom "Gizmo" De Moortel, flying his first season as the display pilot.

Gizmo joined the Belgian Air Force in 1996 and started his standard pilot training at Beauvechain Air Base. After completing basic flying training on the Alenia Aermacchi (formerly: SIAI Marchetti) SF-260M/D and basic jet training on the Dassault-Breguet/Dornier Alpha Jet 1B, he received his pilot wings in 1998. He then went to become a C-130 pilot at Melsbroek Air Base but returned to Beauvechain Air Base 2 years later as an Instructor Pilot on the SF-260.

The demo routine might seem spectacular to the general public, but in fact contains standard F-16 manoeuvers which are flown during practice sessions as operational missions. The only difference between real life operations and this demo is that these manoeuvers are flown in a smooth pattern and at very low altitude. This does mean the demo puts a lot of G forces on the pilot which limits the demo to a maximum of around 15 minutes, giving the audience an overview of the F-16s agility and the skills of all F-16 pilots in the Belgian Air Force.

Another welcome civil display team came from Italy: the Pioneer Team. The Pioneer Team was founded in 2005 by the will of a group of pilots and flight instructors: Franc Borin, Corrado Rusalen, Claudio Fogli, Marco Gioria. The team also express a big thank you for the availability and willingness of some ex Frecce Tricolori pilots which gave their support to give the team the right training.

Their display routine is a demonstration of precision and elegance. They usually incorporate colored smoke coming from pods under their wings and end their routine with a trademark break firing flares. For the Sunset Airshow they also brought an extra: magnesium waterfalls.

The team fly the Alpi Pioneer 330, the aerobatic variant of the Alpi Pioneer 300. It is an Italian ultralight and light-sport aircraft, designed and produced by Alpi Aviation. The aircraft is supplied as a kit for amateur construction and features a cantilever low-wing, a two-seats-in-side-by-side configuration enclosed cockpit under a bubble canopy, and even a choice of fixed or retractable tricycle landing gear. It is designed to cope with G-forced ranging from +9 to -3G. 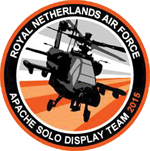 Another familiar sight at the Sunset Airshow is the Royal Netherlands Air Force AH-64 Apache Solo Display Team. Unfortunately at this time, the sun had set but the clouds had thickened as well and it started to drizzle.

The RNLAF is the only Air Force in the world with a dedicated display of the AH-64 Apache helicopter (normally Apache demonstrations are only carried out by the manufacturer, Boeing). The team consists of members of the 301 Squadron “Redskins” of the Defence Helicopter Command stationed at Gilze-Rijen airbase.

Like in previous show seasons, the team continues to use flares to add to the spectacle. These flares, stored in so-called AMASE pods (Apache Modular Survivability Equipment). These pods each contain three Northrop Grumman AAAR-54 sensors and two flareboxes. The goal of these pods is protection against heat seaking missiles (flares) as well as infrared guided missiles. The pods are attached to the helicopter at the very end of both wing stubs.

The flares are used at certain points during the display to add an extra dimension to it, especially at dusk.

For the display, the Hellfire racks and rocket pods are removed from the helicopter in order to save weight and as a result, enabling the Apache to speed up faster in between the individual manoeuvres.

The aircraft itself, Q-17, can be seen in its original camouflage colors, but a special printing is added to add to the display thrill. This printing can be removed quickly, so that the helicopter can be used for operational missions when required.

Pilot in command this year is still Major Roland “Wally” Blankenspoor, who had been flying with the RNLAF since 1997. He has logged about 3300 flight hours, of which 2750 are on the Apache.

First officer is Captain Harm “Kaas” Cazemier, who has been flying the Apache since 1998.

As they concluded their display, there was a short fireworks display.

The Sunset Show ended with displays from Brendan O'Brien and Johan Gustafsson in his modified SDZ-59 Acro glider.

The 2015 Sanicole Sunset Show was once again a gem and even the sun managed to cooperate a little this year. A big thank you to all of the people involved in organizing this event!