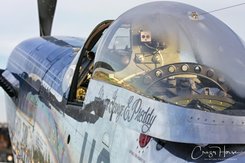 45-11507 was built in the US in 1945. The RNZAF put in an order for 370 P-51D Mustangs in order to replace their fleet of Vought F4U-1 Corsairs in service with RNZAF's 12th Operational Fighter Squadrons.
P-51D-25-NT 45-11507 was amongst the first 30 to be shipped aboard the “Winnepogosis Park” to New Zealand. By the time the first 30 Mustangs arrived in New Zealand, the war was over and orders for any further P-51s were cancelled. 45-11507 was received at the Aircraft Assembly Depot in Hobsonville on September 6th , 1945.

The 30 Mustangs were put in a rubberised Plastiphane coating to help protect against corrosion and were placed in storage in early 1946. They were all transferred to RNZAF Station Adrmore in south Auckland by barge and road in February of 1947. There they remained in storage for another four and a half years.

In 1951 a decision was made to bring six P-51s out of storage in order to evaluate them for Territorial Air Force use (similar to the Air National Guard in the US). The TAF was formed in 1948 and comprised 4 squadrons (1 Sqn Auckland based at Whenuapai, 2 Sqn Wellington based at Ohakea, 3 Sqn Canterbury based at Wigram and 4 Sqn Otago based at Taieri) who mainly flew Harvards and Oxfords at that time.

The Mustangs were put into service with the TAF and formed an active defensive fighter force for New Zealand together with Vampires of No's 14 and 75 Sqn.

By June of 1957 all RNZAF Mustangs were retired and the airframes were passed to the Government Stores board for disposal. A batch of 19 airframes, containing NZ2417, was offered for disposal in April of 1958.

NZ2417 was purchased by a farmer named Ron E. Fetchney of Canterbury for the sum of $75. In order to transport the Mustang to his property, the aicraft's wings were torched off just outboard of the main undercarriage bays. Luckely, a new full mainplane (NZ2409, 45-11499) was acquired from Melvin Grooby at the ANSA company and replacement canopy and a spare engine were purchased from Cliff Horrell in Ashburton. Despite the excellent condition the aircraft was in, the New Zealand Aviation Authority insisted that it be maintained to airliner standards. As a result, the aircraft had to be taken completely apart and thoroughly inspected and signed off. In 1960 Ron sold a half share in the aircraft to Jack MacDonald, a pilot with NZ National Airways, and with his help the aircraft was restored to airworthiness, using the mainplane of NZ2409. The aircraft was finally certified in November of 1964 and the first flight was made on November 29th , 1964. It was now registered as ZK-CCG.

It flew very little (a total of 120 hours, bringing the total to 650 hours) during the next four years on the airshow circuit and was put back into storage in Fetchney's barn in 1968, due to a lack of funds (the Mobil Oil Company had sponsored the aircraft during this period in exchange for a prominent display of their logo on the side of the Mustang, as a result the aircraft was better known as the “Mobil Mustang”).

It would remain in storage once again until 1973. John J. Schafhausen, who's father was a close personal friend of Jack Macdonald, visited Fetchney's farm to view the aircraft. Negotiations went on for about a year and ZK-CCG was finally sold to Schafhausen in April of 1974.

The Mustangs was flown to Christchurch where it was dismantled for shipment to the US, along with a spares holding. It arrived safely in Seattle, cleared US Customs and was transported to the Experimental Aircraft Association Flying Museum in Spokane, Washington.

The aircraft was reassembled and test flown in early 1975. It also received its new registration N921. John was very keen on repainting the Mustang in an authentic WWII color scheme. After examining several books on the 8th AF, the decision was made to have the Mustang represent the personal aircraft of Major George E. Preddy of the 352nd FG, based at Bodney: “Cripes A' Mighty 3rd ”.

The paint job was applied by Aero Paint Systems based at Renton, Washington. The aircraft was etched and primed and the new paint scheme was applied over a period of six weeks.

John flew the aircraft on a regular basis until its ownership passed on once more, this time to Gene Stocker of State College, Pennsylvania, on September 1st , 1975. Stocker raced the aircraft very briefly as it was once again put in storage until it was sold to its current owner, Kermit Weeks in 1979. It now belonged to the Weeks Air Museum in Tamiami, Florida.

In 1982, 45-11507 was to undergo a major restoration. Some ten years later Hurrican Andrew swept across Florida and caused substantial damage to several buildings, including the Weeks Air Museum and consequently damaging Cripes A' Mighty in the process.

A couple of months (late 1993, early 1994) later the aircraft was shipped to Cal Pacific Airmotive in Salinas, California, where it was once again completely restored. Only this time the restoration standard was very high and the aircraft was almost restored to full stock condition.

The restoration was completed in 1999 and the aircraft took to the sky once again in February of 1999. Giving full credit to the magnificent restoration work, Cripes A' Mighty won Grand Champion award at the 1999 EEA at Oshkosh. 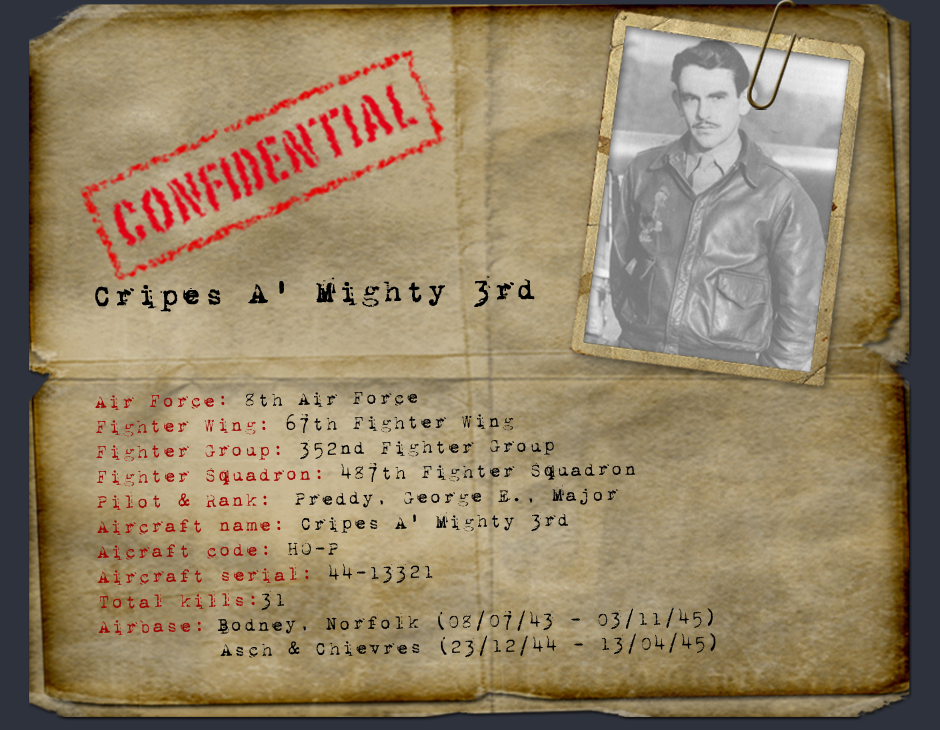 George Preddy named all of his P-51 Mustangs "Cripes A' Mighty", an expression often used by George during a game of craps.

George Earl Preddy, Jr., was born and raised in the small town of Greensboro, North Carolina. He graduated just 5 days after the Pearl Harbor attack and joined the 49th Pursuit Group after a short leave. Stationed at Darwin, Australia, George first flew the P-40 and participated in the defense against the Japanese. George named his P-40 Tarheel, after the state he grew up in.

In October 1942, Preddy arrived at Hamilton Field, California, looking for an assignment, but it wasn't until December 1942, when he was assigned to Mitchel Field, NY, that he became a member of the 487th FS, 352 FG. It was there where he would excel, especially when he started flying the P-51 Mustang.

Preddy became the P-51 Mustang top ace, scoring 26.83 and 4 shared kills whilst flying the P-51. Of those kills, 15 were made in "Cripes A' Mighty 3rd", making that Mustang probably the highest scoring one in WWII.

You can read more about George E. Preddy in our biography here.

The 352nd FG was assigned to the 8th AF on July 6th , 1943, and was stationed at Bodney in Norfolk, UK. They converted to the P-51 Mustang at the end of March, 1944. It was at that time that all units in the 8th AF were assigned different Group colours.

The 352nd FG applied a bright sky blue shade to the noses of their P-51s, which were B- and C-models at that time and which were all delivered in the two-colour camouflage paint scheme of Olive Drab and Neutral Grey. However, the light blue coloured spinner and 12-inch wide nose band provided insufficient contrast with the camouflage finish, so the blue paintwork was extended back to a point approximately halfway below the exhaust stacks and then swept up and back to the windshield.

The following month, the 328th and 487th FS began receiving their replacement Mustangs, all in a natural metal finish.

For a very brief period the 352nd FG attempted to identify its new aircraft by replacing the white QIM cowlings with a substitute application of a medium blue paint. This particular procedure was quickly abandoned when it was determined that there was insufficient contrast between either finish to be functional as a group marker.

In May of 1944 the 352nd FG selected an RAF Azure Blue shade of paint to replace the original Medium Blue Group colour. The distinct blue colour earned them the name “Blue Nosed Bastards of Bodney”.

On June 3rd , SHAEF issued an order for the application of the infamous D-Day stripes (aka Invasion Stripes). With the hastily application of the stripes on all operational aircraft, the second unit code letter was almost completely over painted, as was the unit call letter. The 328th FS and 487th FS elected to relocate the call letter to the tail fin, while the 486th FS chose to reposition it just above the wing root and slightly back from the exhaust cut-out. This was short lived however and by late June the 486th FS also repositioned the letter to the tail fin.

As the war progressed some unit markings and colours changed slightly, some to offer better visibilty, others for a more esthetic reason. Starting in the summer of 1944, the 352nd applied a slightly darker shade of blue as they started receiving bare metal finished P-51Ds. The shade used was probably British Deep Sky Blue, which was similar to Insignia Blue.

The original "CRIPES A'MIGHTY 3rd" was an "early" P-51D, easily identified by the lack of the fin-fillet at the fuselage/tail join, and wore an overall natural-metal finish. With Allied air superiority achieved in 1944 camouflage became a minor issue for pilots and many fighter aircraft were stripped of their camouflage schemes or left in their natural-metal delivery finish. George received “Cripes A' Mighty 3rd ” on July 18th , 1944.

A black 12in. identification band was on bottom of the elevator and on the horizontal stabilizer. The small crew names were black. The pilot's name on the canopy frame was red with blue shadow shading.

The style of kill markings applied were white Balkan crosses, these were strung along the port engine cowling on top of the blue background colour of the nose.

Our own pictures of N921

© Unknown
Please contact us if you are the © holder